Among the highlights of the annual LA Fleet Week® celebration of the U.S. Sea Services are free public ship tours, which get underway Friday, Aug. 30. Names and details of the four U.S. Navy and two U.S. Coast Guard participating ships were officially released today: 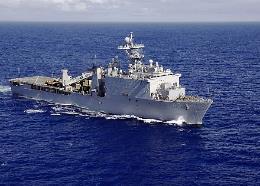 USS Spruance (DDG 111) – A U.S. Navy Arleigh Burke-class guided missile destroyer. Second ship to be named for Admiral Raymond A. Spruance, who commanded American naval forces at the Battles of Midway and the Philippine Sea. The USS Spruance’s official motto is “Launch the Attack”.

U.S. Coast Guard Cutters Forrest Rednour (WPC-1129) – The 29th Sentinel-class cutters built for the United States Coast Guard. She is the first of four Sentinel-Class Fast Response Cutters (FRC) to be home-ported on the west coast of the continental US, California.

Public ship tours offer visitors up-close and personal glimpses of active U.S. Navy and U.S. Coast Guard vessels, and show what life is like aboard a working military ship. Tours are on a first-come, first-serve basis, unlike previous years when reservations were required. Closed-toed shoes for ship tours are also highly recommended (no sandals or flip flops).

LA Fleet Week® is a multi-day celebration of our nation’s Sea Services that takes place on the LA Waterfront at the Port of Los Angeles. Now in its fourth year, the event has become a

For the latest updates on LA Fleet Week 2019, sign up for news announcements at